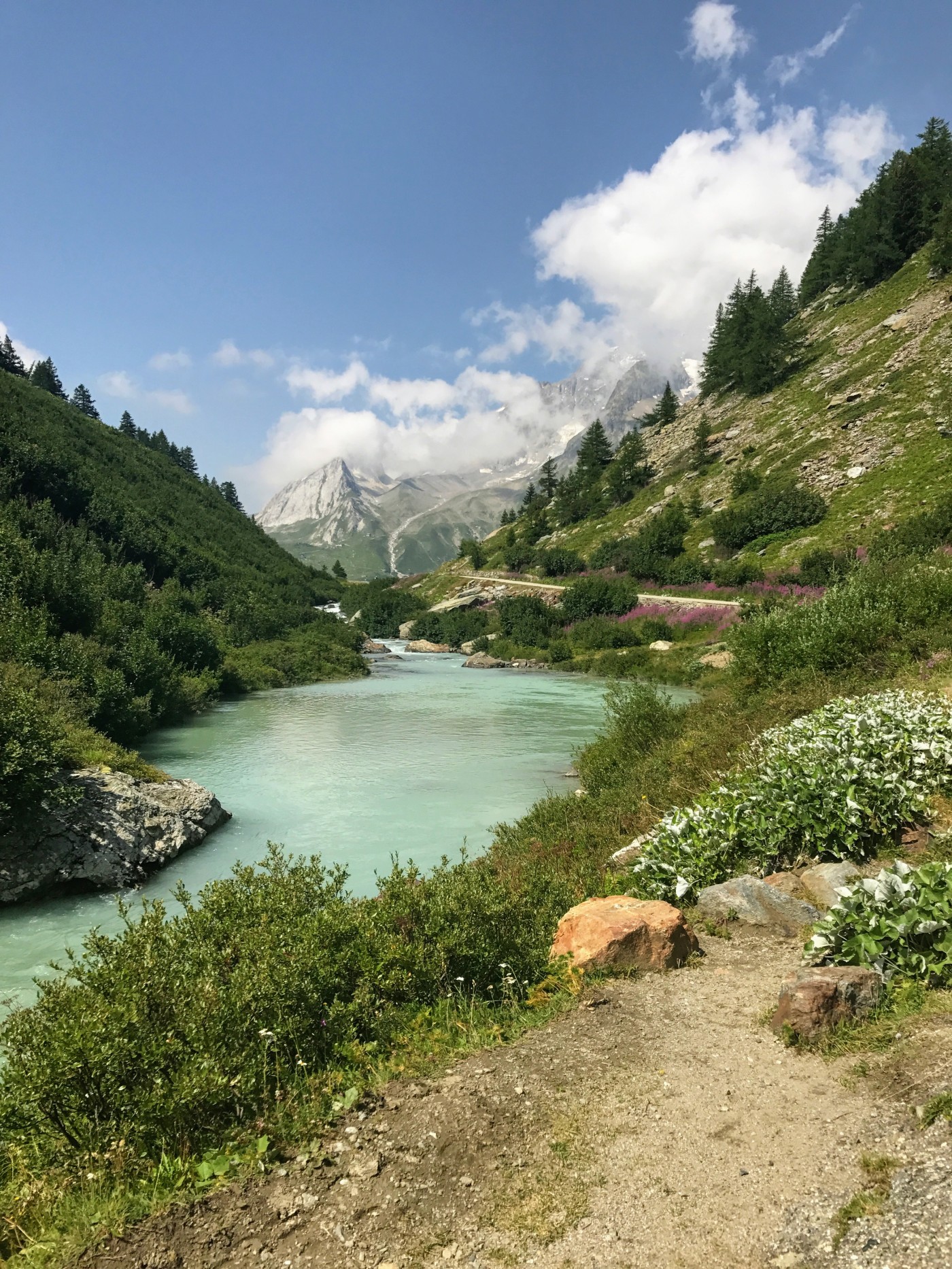 *We took a bus the final stretch to Courmayeur, so if hiking the entire way, the distance would be slightly longer.

For our itinerary, Day 3 of the Tour Du Mont Blanc proved to be another really long day. After a good night sleep at Refuges Des Mottetes, we woke up bright and early to have breakfast and check out.  The breakfast spread was similar to the day before; breads, cheese, jams, etc.  After filling up, we got moving on the trail and started heading uphill (of course).  Shortly into the hike we came across a memorial site. 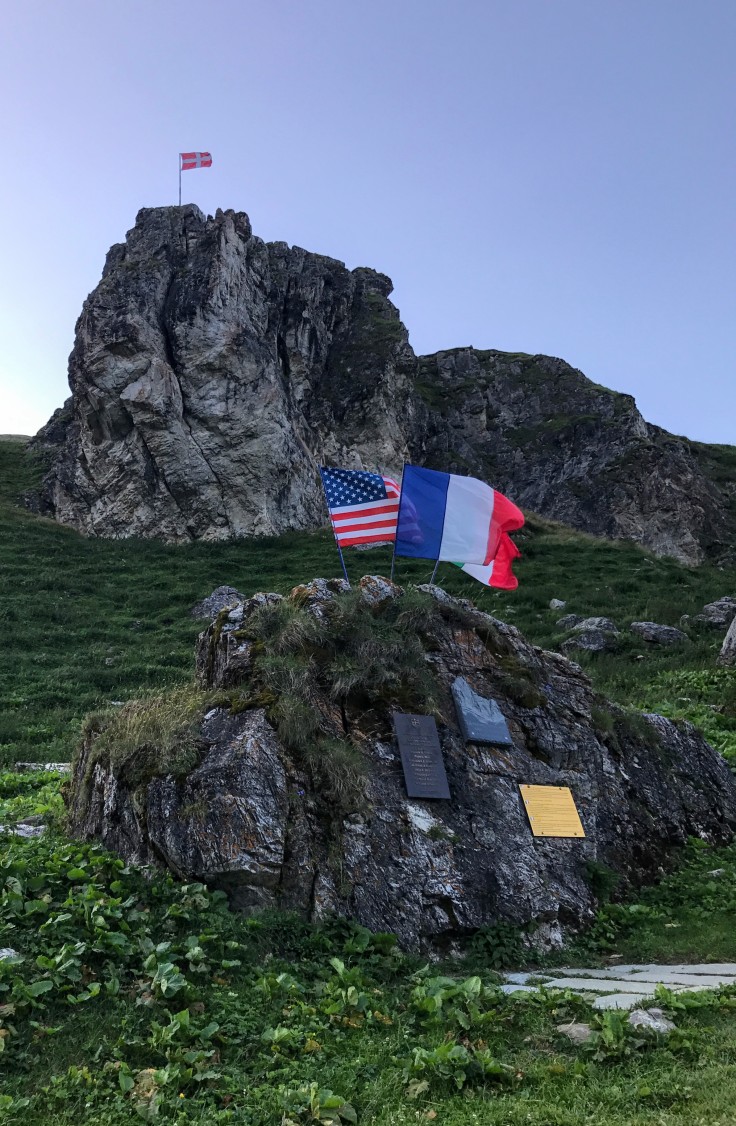 Not too far into the hike, we realized we were going to be going up for quite a while. We could see tiny moving dots of ahead of and above us for most of the morning which let us know how much farther we’d have to go before we’d make it over the mountain.  At times, this was kind of discouraging.  I think I prefer not to know what’s ahead.

As we continued to hike, the sun began to rise over the mountains behind us creating a beautiful view!

In front of us however, were a lot of clouds and wind.  This was the only time on the hike where I was legitimately cold.  I put most of my layers on and was incredibly thankful to have brought a beanie to shield my ears from the cold wind!  Although the wind was miserable, we continued to get closer and closer to the glaciers that we’d been looking up at the night before, which was pretty awesome!

As we were finally making it to the top of the pass, the wind and fog became more and more intense and we could barely see a thing.  This was supposed to be one of the most scenic parts of the hike but all we could see was fog. 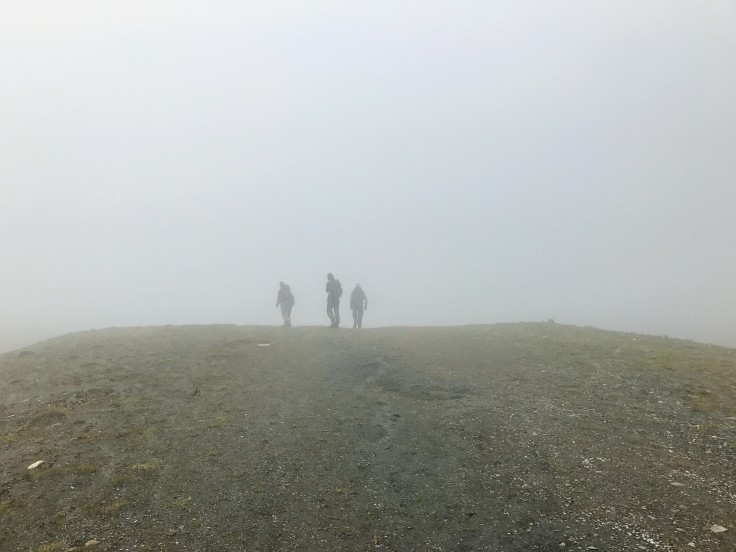 As we passed through the fog we eventually started going downhill and began to get better views of the scenery around us.  By the time we’d crossed into Italy, we were out of the fog.  We knew we were in Italy without looking at the map because all of a sudden, the people we passed on the trail started saying Ciao instead of Bonjour!

The views as we continued towards La Visalle were some of my favorite on the trail.  It felt like we were walking alongside the foot of the mountains and they seemed so massive from that point of view!

Eventually we ended up hiking through what seemed like a place where locals came to exercise and enjoy the views.  There were lots of people passing us who were not carrying any gear and there were may people with small children or dogs.  The trail lined the water and was breathtakingly scenic.  I was really jealous of all the people who looked like they got to enjoy this scenery regularly! 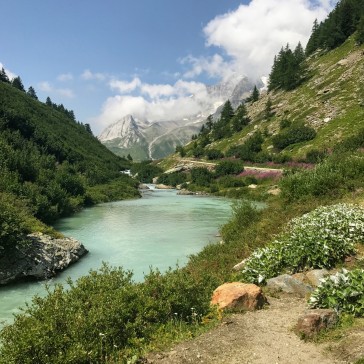 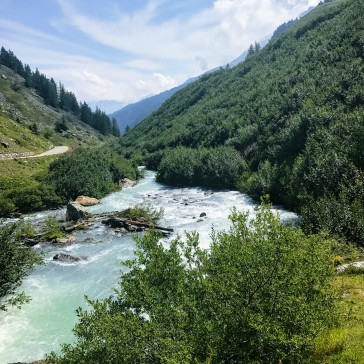 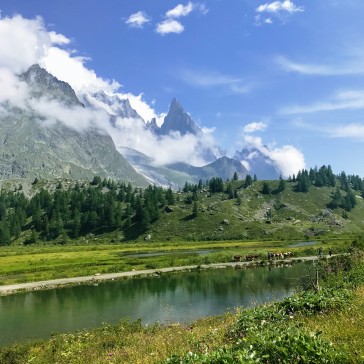 We continued walking for what seemed like forever and my feet started to hurt from going downhill for so long. Also, there wasn’t anywhere to use the bathroom for what felt like hours. Needless to say I was super uncomfortable and ready to get to our destination.  We kept thinking we must be getting close as we kept passing more and more young kids, dogs, and elderly people, but the trail seemed to never end.

Eventually we made it to the end and stopped to ask some ladies strolling their babies where the nearest transportation was.  We’d heard that we could take a bus on the last stretch to Courmayeur.

Luckily we figured out how to catch the bus and rode it into Courmayeur where we were dropped off about 5 minutes from our hotel.  As we walked through the streets of Courmayeur, I could tell I’d want to stay longer than we were going to be able to!

We stayed at the Grand Hotel Royal e Golf which was such a treat after 3 long days of hiking.  We had our first ‘real’ shower and laid around on our king size beds in the hotel bath robes for a few hours after arriving.  To this day I don’t recall a shower ever feeling as luxurious as that one! Although the hotel is a 5 star hotel, to our surprise, there was still no air conditioning; I guess we are just spoiled in America!

After our nice rest in the hotel room we wandered around the town and found a cute little spot to eat outside.  Josh was finally feeling up to eating again and had his first real meal since Day 1 of the hike.  We enjoyed pizza and wine and the amazing scenery!

We enjoyed our time in Courmayeur so much, and we were so exhausted from the 3 grueling days of hiking, that we really wanted to stay there the next day to rest and recover.  Unfortunately, there weren’t any transportation options along the next part of the trail so we couldn’t buy any time to spend an extra day staying put.  Instead, we enjoyed a good nights sleep in our hotel and reveled in the luxury as much as we could until we had to leave the next morning.