Day 2 of the TMB  is usually considered one of the most strenuous days of the entire hike.  We would agree with that! Luckily, we were at least mentally prepared for this long day, unlike the previous!

At dawn, we were woken up by the sound of roosters crowing and a heard of sheep right outside of our window.

Once we got out of our twin beds and put our clothes on  (still damp from the day before), we went downstairs for breakfast.  Breakfast was a mix of granola, breads, jams, and cheeses.  I filled up as much as I could but Josh was still queasy from pushing himself too hard the day before so he couldn’t eat.

We finished packing up our gear and headed out, but before we got more than a few steps away from the refuge we decided to go back and ask for directions to avoid another situation like the previous day.  Many of the other guests at the refuge seemed to be climbing up the mountain rather than doing the TMB so most of them weren’t exactly sure which direction to point us in.  I finally found someone who seemed fairly confident that we would need to head back in the direction we’d come the day before.  Reluctant but hopeful, we headed back down the mountain. 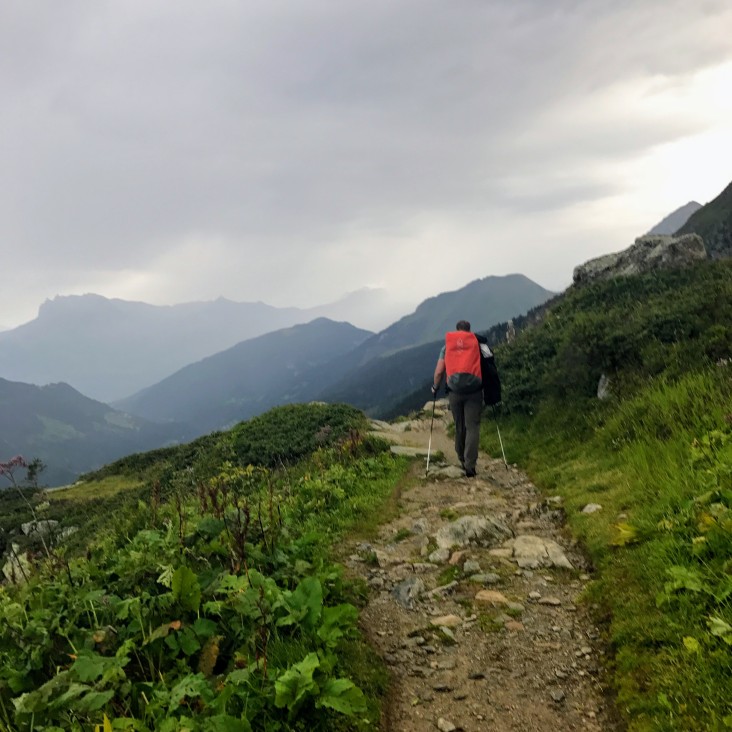 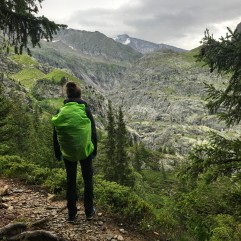 Eventually we came to signs for Nant Borrant which meant we were headed in the right direction.  We also started to see the water filling stations that we’d read about.   It’s pretty awesome that the trail is dotted with these so you don’t have to filter water or carry extra! Added bonus is that the water is delicious since it comes from the glaciers above! 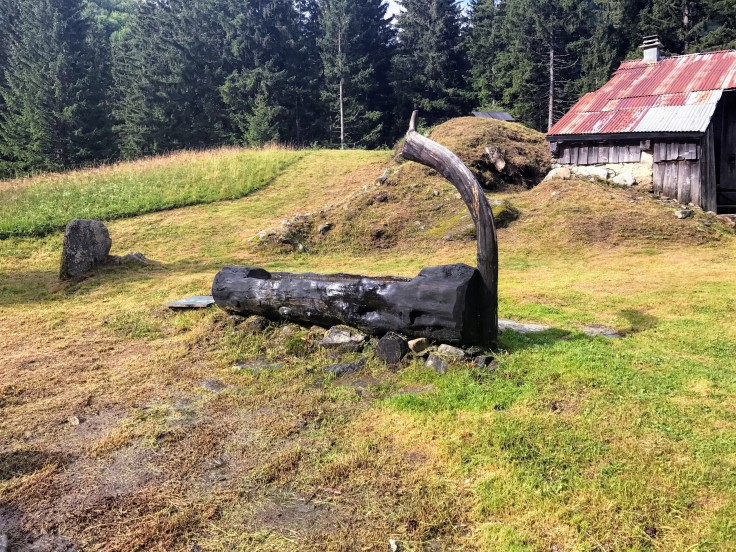 As we continued hiking, the trail started to level out some which was a nice break from the downhill we’d been doing all morning and the uphill we were about to do for the next few hours.

Once the trail flattened out we came to a road running perpendicular to the wooded trail we were on.  There were lots of people walking on it in the same direction so we knew for sure at this point we hadn’t gotten lost.

The road was the beginning of a long ascent that started off with a gradual incline and eventually turned into what I can only equate to an incredibly brutal workout on the stairmaster!  This part of the trail was the most crowded part of the entire hike.

A little ways up we reached Refuge De La Balme where we stopped to take a break and buy some food.   We bought a ham-and-cheese sandwich to share that really hit the spot. 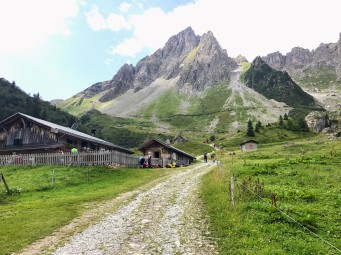 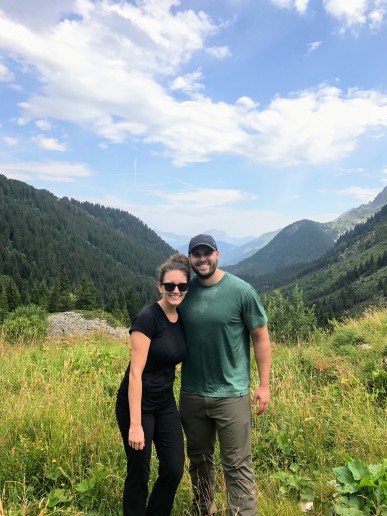 As we continued up, the trail got much more demanding, but the views only got better.

After what seemed like forever, we finally made it to the top of the pass! 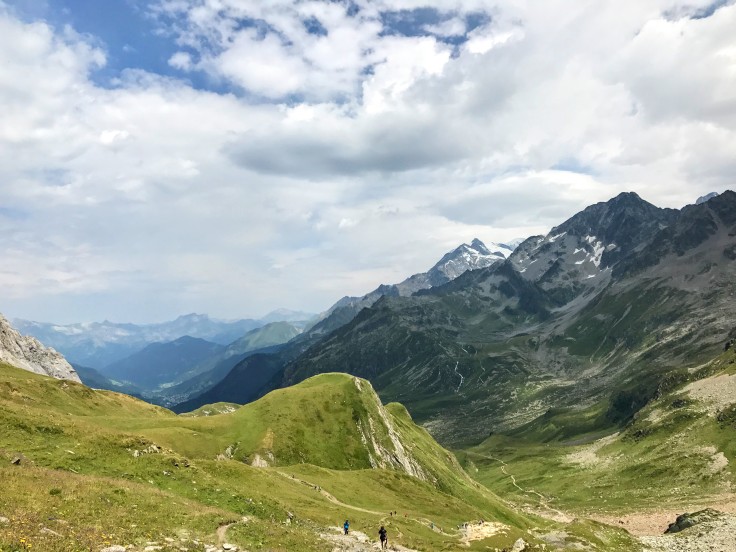 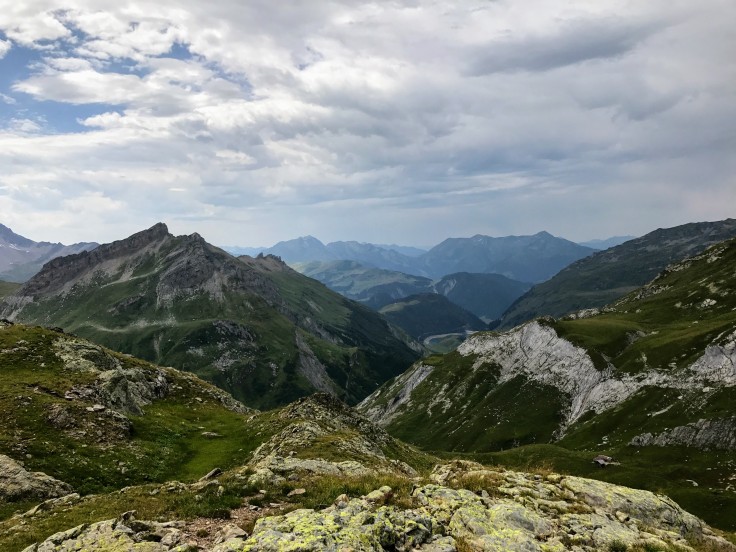 I was relieved to give my quads a break, but I didn’t know I’d be begging for uphill terrain in the next hour or so.  The rest of the day was almost entirely downhill and it was painful! 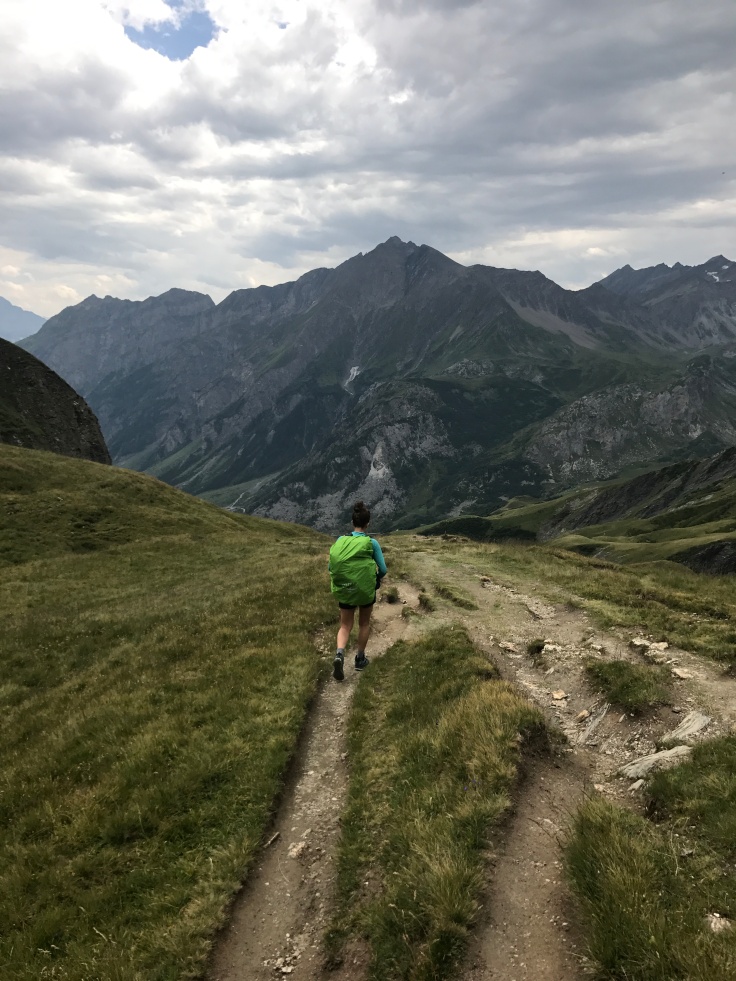 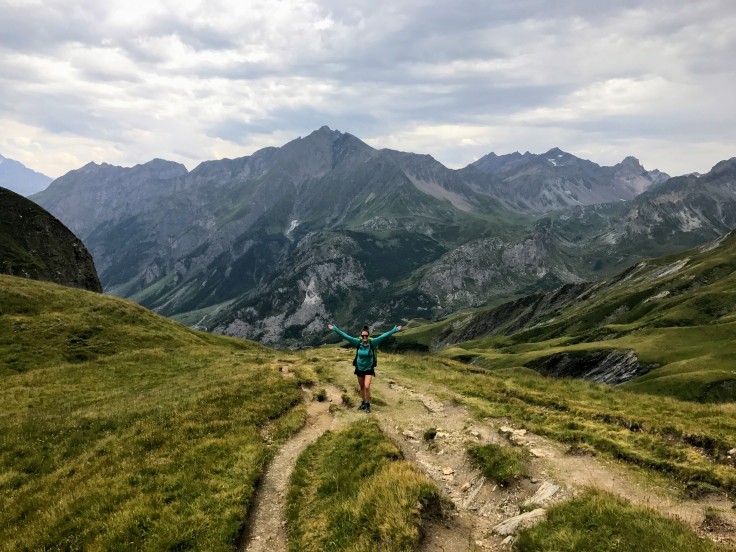 The enthusiasm I had in the picture above didn’t last very long because of the knee and toe pain – about an hour or so into the downhill I was almost in tears and deeply regretting not bringing hiking poles (although Josh was a sweetheart and let me borrow his)! At least the scenery was still incredible!

Once we finally got down the mountain to Les Chapieux we still had about 1.5 more hours of hiking to get to Refuge Les Mottetts.  We asked around and found that for a couple of Euros, there was a bus that could take us most of the way and would leave us only about a 30 minute hike to the refuge.  It felt like a miracle! The bus stops running around 5 or 5:30 and we had made it just in time!  Once we got on the bus we started talking with the other couple who’d been on the trail with us for most of the day.  They were just as beat as we were and we decided to try and offer the bus driver extra money to take us all the way to the refuge.  We ended up going all the way up to 60 euros, but he wouldn’t agree.  Eventually we made it to our stop and had to trudge our way up a slight hill for 30 minutes before we could finally rest. 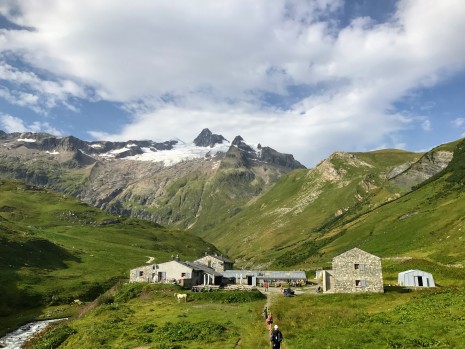 When we arrived at Mottets we checked in and got the key to our room.  Our room had a full bed with a private bathroom and shower which was a luxury compared to the night before.  We showered and headed to dinner in the dining hall that had a great atmosphere! It was charming and also lively and perfect for meeting the other hikers. We met a nice couple who were from Sweden and the UK and were running the TMB (which I still can’t even imagine doing) and chatted with them during most of our meal.  For dinner we were served lots of bread,  vegetable soup, and a venison and rice dish. I was feeling pretty accomplished after the day we’d had, so I treated myself to a couple of glasses of wine while I ate. We were also served dessert and cheese after the meal which was another nice reward for the long day. Unfortunately, Josh was still struggling and couldn’t eat much or enjoy any wine so he was thrilled when the day was finally over and it was time to pass out.

This was absolutely one of the most difficult days of hiking I’ve ever experienced, but it was also one of the most rewarding, and because I’m a little crazy I would probably do it all over again!