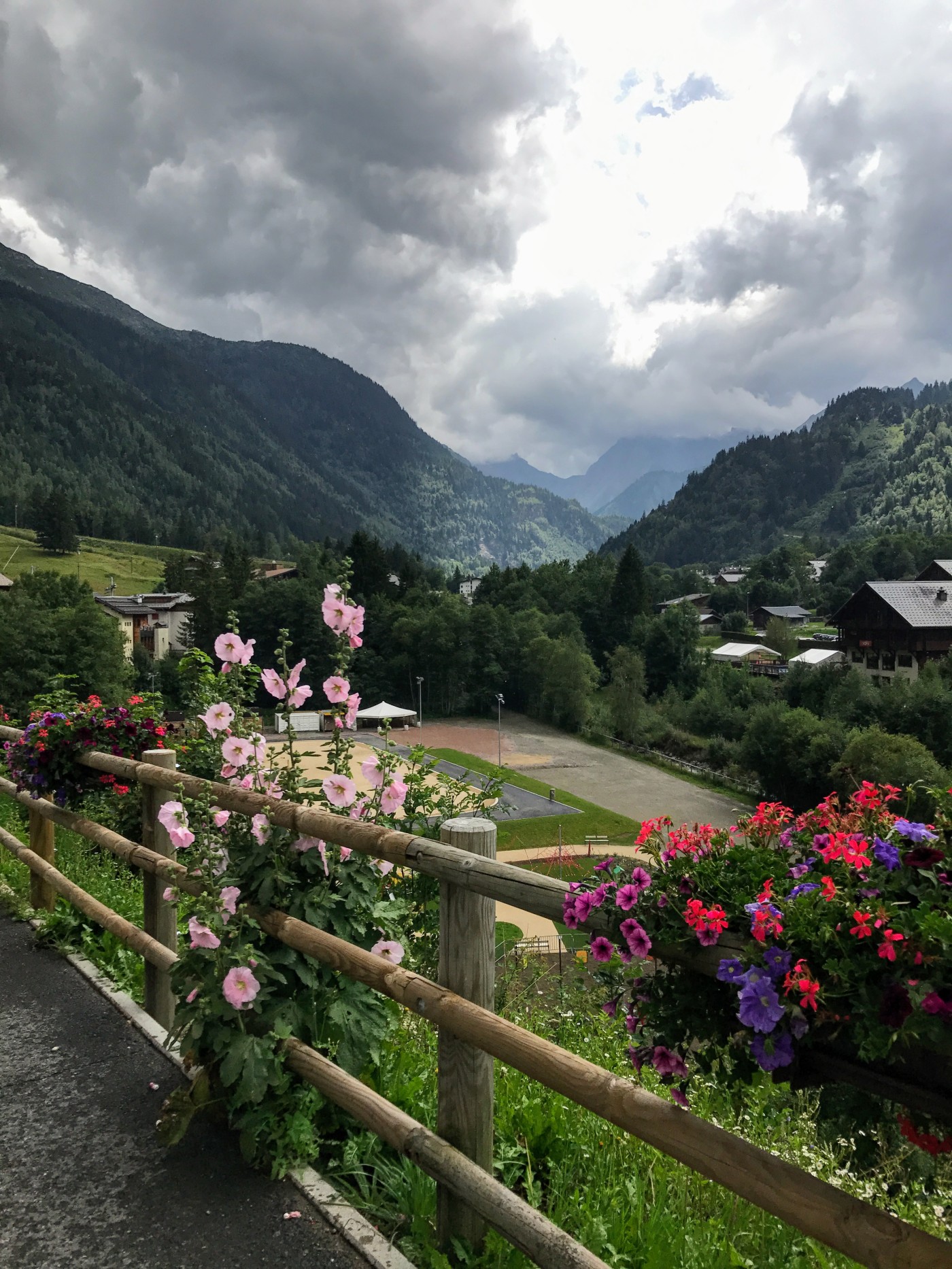 Day 1 of the Tour Du Mont Blanc will be an intense intro into the hike if you take the same route we did!

We started the morning out having a big breakfast at our hotel, Le Refuge Des Aiglons, which had a wonderful spread! However, the breakfast wasn’t included with the price of our room so it did cost us 17 euros per person, but it was worth it to get a good meal in before hiking all day long. After loading up on some carbs, we headed outside to the bus stop that was just across the street to catch the 7:30 bus to Les Houches.  Since our hotel provided us with free bus passes, it didn’t cost us anything to ride.

Once we arrived in Les Houches we weren’t completely sure where to go, but we knew we wanted to get on the Bellevue Cable Car so we just followed the crowd off the bus and ended up at the right spot.   The Bellevue Cable Car costs 14.00 per person to ride up to Bellevue where you can start the hike.  However, you can hike this part instead of taking the cable car, but you’ll be adding quite a bit of hiking on to an already long day. 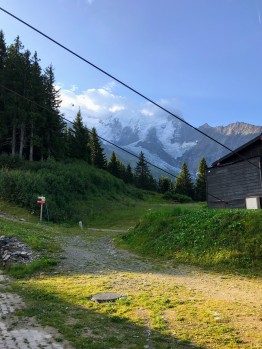 Now the real fun begins! This is where you actually start hiking, and the trail starts off with some pretty awesome views! 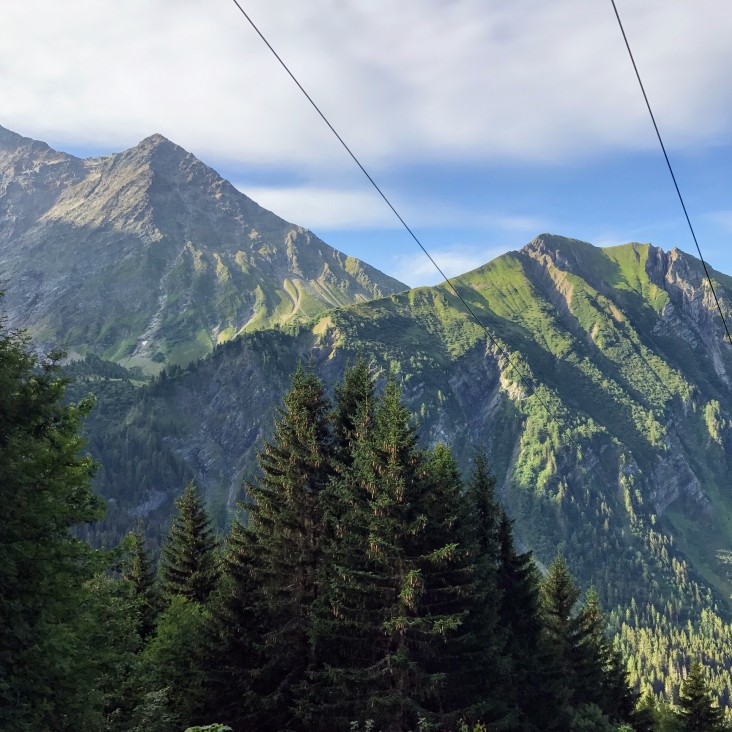 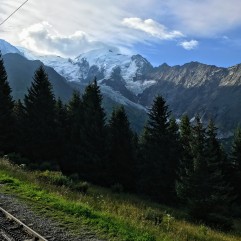 Not too far into the trail there is a fork in the road which gives you the option to take a harder route, which obviously comes with spectacular views, or take a slightly easier route.  Of course, I wanted to take the harder route, but Josh wanted to take the easier one.  Since it was only our first day and we had 5 more days of hiking ahead of us, I decided Josh’s option was probably wiser, and at the end of the day, I was SO glad I listened to him.

We may have missed out on some views from the harder route, but the scenery we saw was still incredible!  We got to hike through the french countryside where people actually live right in front of the mountains and can walk into their backyard and and admire the alps! 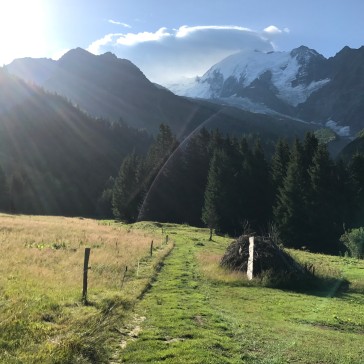 At this point so far, the trail hadn’t been too hard and we were still full of energy and excitement. 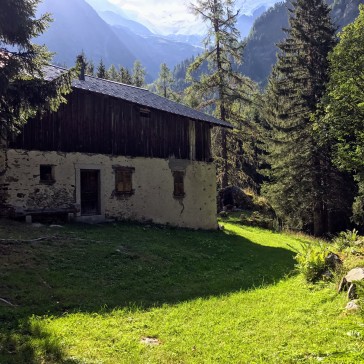 For the majority of the day we were pretty much alone on the trail which was really nice. 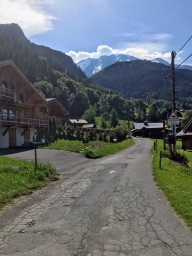 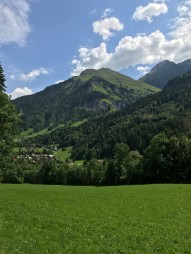 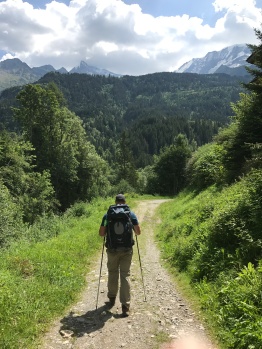 Sometime late in the afternoon, we arrived in Les Contamines. We thought we were pretty close to the refuge that we booked for that night so we decided to sit down and have a late lunch and relax for a bit before making the final hike to the refuge.  We had an amazing appetizer, and of course some pizza and wine!

After thoroughly enjoying our late lunch and being off our feet we decided to head to the refuge as quickly as possible because the sky was pretty ominous and we’d already been sprinkled on some. We at least got to enjoy some of the charm of Les Contamines on the way out.

Not too long after heading out for our final leg it started pouring so we had to take shelter under an awning of a building.  When we finally got going again, we walked a short distance before realizing that we didn’t know where we were going.  We were supposed to be staying at Refuge de Tré la Tête but we weren’t sure exactly how to get there. After wandering back and forth for a bit, we stopped into a hotel and asked for directions.  The lady working at the hotel told us there were two different trails that we could find that would lead us up to the refuge.  We headed for the one that sounded like it would be easier to find.  Fortunately, the trail was easy to find, but once we were on it, it was pretty much straight up for the next 2-3 hours, and we were not mentally prepared! Not only was the trail longer and harder than we were expecting, but it started to storm, so we were basically racing against the clock to get to the refuge and out of the bad weather before we got struck by lightning!

Needless to say, I didn’t get to take too many pics during this part of the trail. 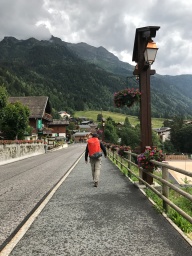 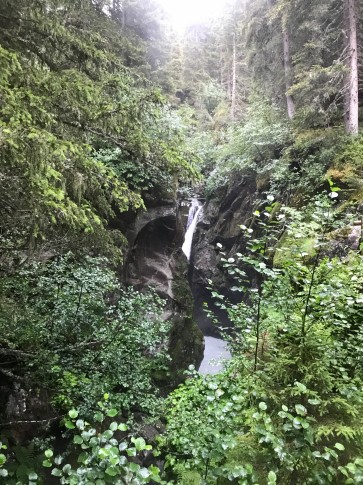 After what seemed like forever, we finally made it to Refuge de Tré la Tête soaking wet, freezing, and starving.   Thankfully we made it in about 30 min before dinner would be served.  When we made it inside, the hosts and other guests let us know that if we’d taken the other trail, we would have had a much easier and shorter route.  I almost wish we’d never found that out!

The first thing we did was get out of our wet clothes and take a shower so we could warm up and put on dry clothes!  The refuge offers private rooms, but they don’t have private bathrooms, so there are communal showers.  The showers require you to push a button for the water to flow and it only stays on for about 15 seconds, so showering there wasn’t the most convenient.  Fortunately the water was warm!

After changing and settling in, it was time for dinner.  The refuge has a big dining hall with several tables and the hosts assign you a seat. Josh and I had our own table which was good since Josh was in no condition to socialize.  The rushed hike up the mountain in the cold made him pretty sick. He’d basically pushed himself physically for 3 straight hours so he was dehydrated, nauseous, and still cold. Although I felt sorry for him, I could barely think about anything but food. They served bread with a hot vegetable soup which seemed to be unlimited, followed by rice and venison.  Next was a plate of different cheeses, and then dessert.  It was so nice to have such a warm hearty meal after the day we’d had!

After dinner we barely had enough energy left to make it up to our room and pass out!